A lot has been going on so I have lots of posts coming up in the next few days… or weeks, depends on how quickly I’m able to edit the photos – so beware of the spam, ahah! (( ´∀`;)) I made an unofficial promise to myself that I’d have all the remaining backlogged posts from 2015 up by the end of January but we’ll see if I’m able to do that. (-∀-`; ) Hopefully yes.

But well, let’s move onto the actual topic of this post. Since I was able to acquire DD Sheryl Nome, of course my next problem was: where to find eyes for her? ( ；´Д｀) She’s more mature-looking than my other DDs and has smaller eyes, too, so it proved a bit tricky to find eyes for her, since most that are being offered (and obtainable for us non-Japanese hobbyists) are in the 22-24mm range. And especially after I saw Hisyo-Hisyo‘s photos of Sheryl with 16mm & 18mm eyes, I thought that I’d want at least 20mm eyes for mine. Perhaps even as small as 18mm. But – where to find such eyes? ｢(ﾟﾍﾟ)

All my other girls wear urethane eyes from Lizanna and I’ve really liked those. They’re beautiful and reflect light very well. (｡’▽’｡)♡ Most of the acrylic eyes that I’ve tried have been dull and the irises quite pixelated but there hasn’t been such issues with Lizanna eyes. But they’re also offered only in 22mm and 24mm sizes. But since Juu-Yuki had recently had a custom colour event, I thought that I’d try and ask her if she’d be open to making custom sizes as well. No harm in asking, right? And thankfully Yuki agreed! ヾ(@°▽°@)ノ Well, first I made sure that the 22mm size eyes fit inside her head, so that she’d be able to use the same mould for the eyes, and only make adjustments to the iris’ size. I wasn’t sure whether I should get 20mm or 18mm for Sheryl, as a lot depends on the shape or the iris, too… whether the eye looks good or not. But Yuki was super accommodating and said that she could make both sizes for me to try in Sheryl, yay! (人´ω｀*)♡

While I was at it, I also ordered a custom pair in case I’d win Shijou Takane from Volks’ lottery, but sadly I didn’t… I swear I jinxed it with the eyes, lol!（ ´∀｀）Oh well, I’m sure I’ll find use for that pair as well. I also got a couple of other pairs as I’ve been planning to order 24mm eyes for my DDH-06 twins. Back when I made my first order, only 22mm was available and I’ve always felt that it’s a bit small for DDH-06’s big eyes… so, I added two pairs of eyes for my twins as well. And then I also got one more pair that I wanted to give to Yenna as a (belated) Christmas gift, hehe~ (´∇ﾉ｀*)ノ

I got the eyes already last week’s Thursday but I had to leave town that same day, so I didn’t have time for taking photos then, let alone making a blog post. I thought that I could do some size and style comparisons with all my DD girls, since I now have Sheryl, too. I myself appreciate seeing comparison photos, so hopefully these might be useful for other people as well.

Here end the photos that I was able to take last week. I got to quickly try on both Zircons in Suiren (my Sheryl) and came to the conclusion that I like 18mm the best in her. She’s got more mature features, so I think a smaller iris size suits her better… the 20mm made her look more cutesy. The big irises suit Megumi (Mariko) well because she’s got more of a babyface, but for Suiren I definitely like the smaller irises better.

Yesterday I was able to do some comparisons of the sizes and shapes in my dolls, and naturally I took photos as well:

First I compared 22mm and 24mm Stardust series eyes in my DDH-06 girls.

I’ve gotten kinda used to the 22mm eyes in my twins, although Emi always looked a bit more wide-eyed than Ume for some reason… so the 24mm eyes looked a bit strange to me at first, but now I’ve gotten used to them and I do think I prefer them. They’re easier to position and my girls don’t look so – well, startled anymore. Especially when I tilted their heads backwards, they always looked SO horrified with the 22mm eyes, lol!（ ´∀｀） Photo evidence: here.

Next I wanted to see how 20mm eyes look in Mariko. I prefer 22mm in her myself because as I said earlier, she pulls off the cutesy look well. But I thought that I’d take photos for reference anyway, because someone else might want smaller irises for their Mariko. It’s all about personal preference, anyway.

As you can see, the 20mm eyes gap a little at her bottom eyelid. Because if I’d positioned them to touch her bottom lid, she would’ve looked way startled, ahah… but if you like the gapped look, then 20mm is a good choice – with this particular iris shape at least. Some iris shapes don’t suit Mariko all that well (although of course this is just my personal opinion), for example these 20mm Angel series eyes that I tried in her didn’t look too good. They don’t gap, but she looks very startled despite that:

And finally, I took photos of miss Sheryl in Moonlight Zircon 18mm & 20mm eyes, as well as the Angel series 20mm. With the Moonlight series’ eye shape 18mm looks better to me than 20mm, although 20mm works as well if you like the more cutesy look. Angel series’ iris shape suits her quite well in 20mm size as well. But the Moonlight Zircon 18mm’s ended up becoming my girl’s defaults since I wanted red-ish brown eyes for her~

I’m definitely super happy with the eyes, once again~ (´∀｀)♡ Now all my girls are super pretty, hehe! (/∇＼*)｡o○♡ I made collages of the comparisons and posted them in my flickr: 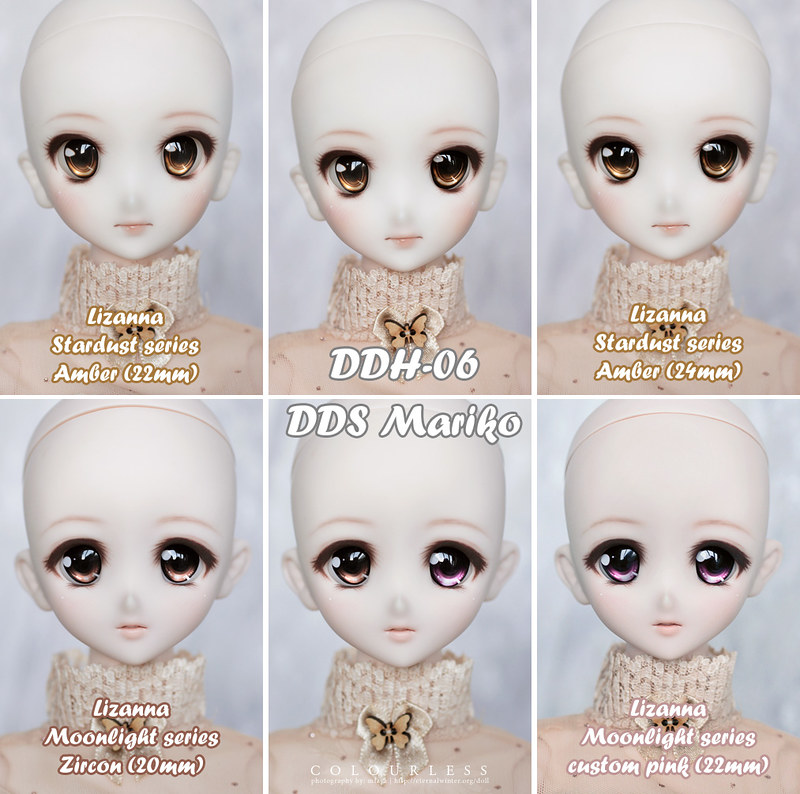 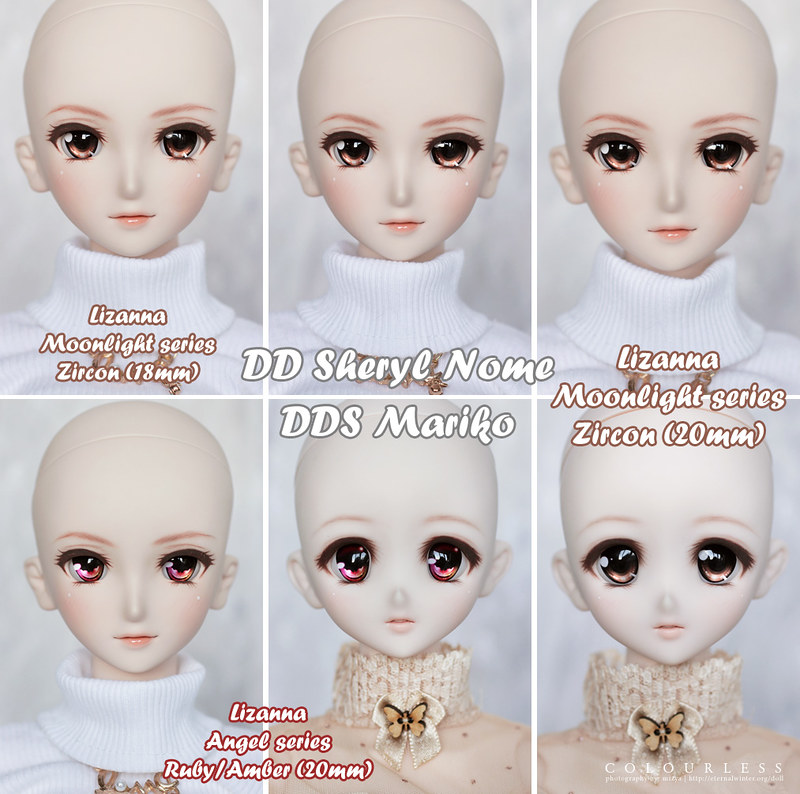 And here’s the one I made earlier: 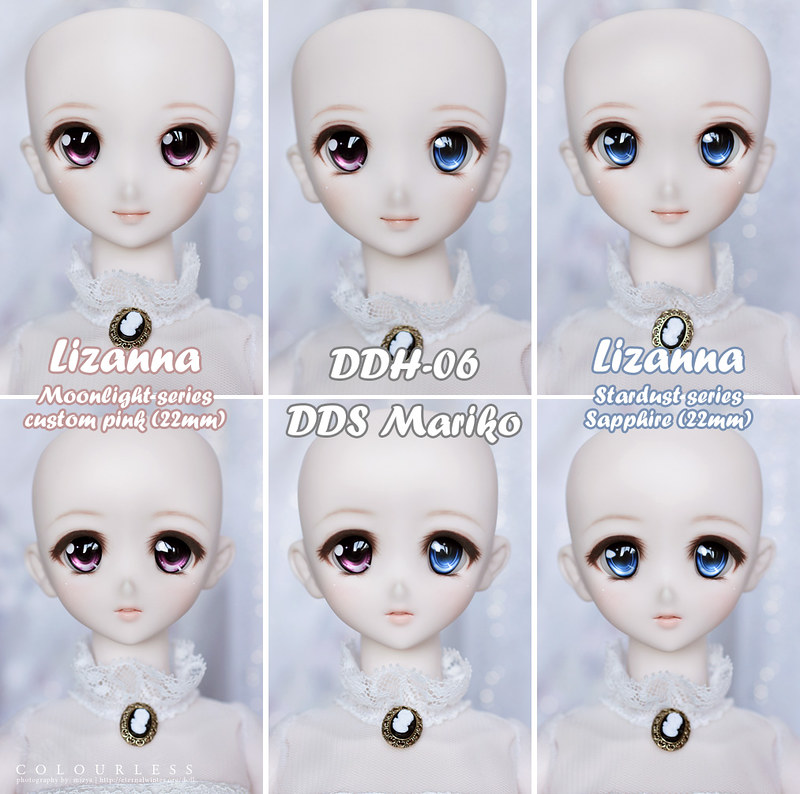 EDIT: Visited Yenna and she took photos of her girls as well: 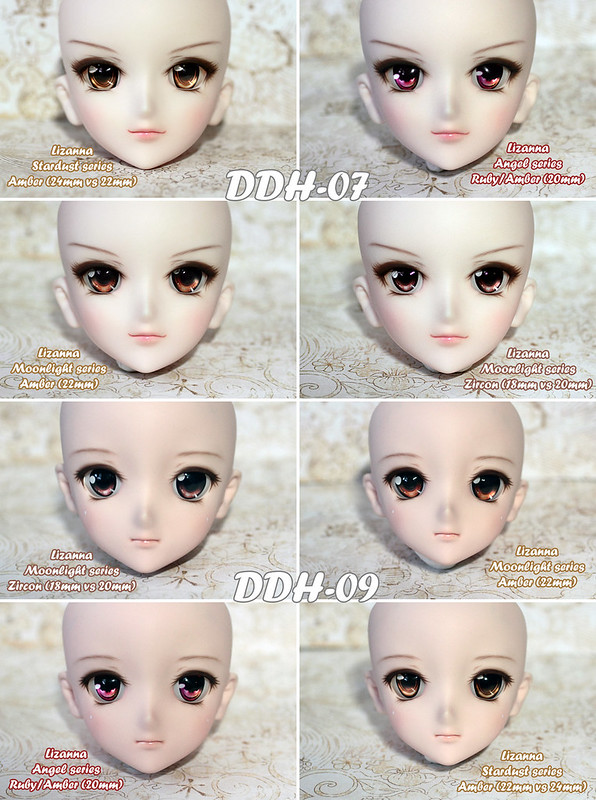 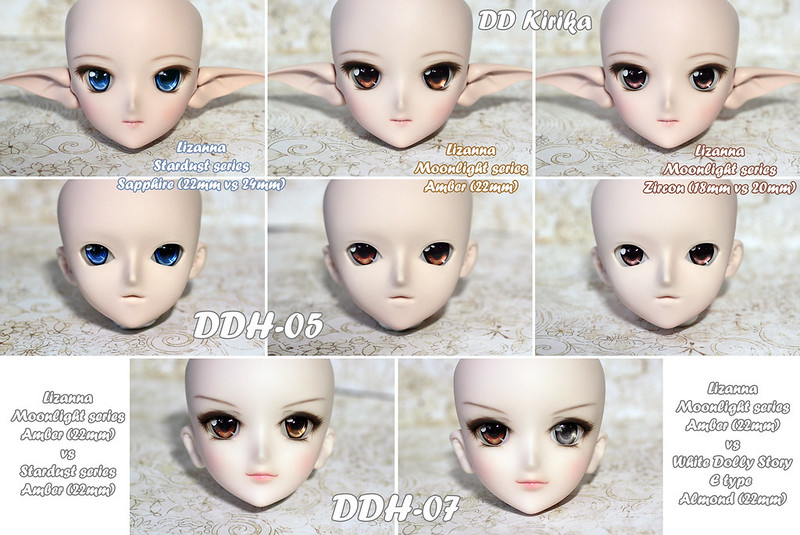