… I’m sure that most of you will be thinking that once you see what this journal is about. xD But this time, for sure, I believe this will end up being a new, refreshing beginning for me. I can honestly say, I tried to make it work, but it didn’t. So it’s time to face it and say: fantasy dolls aren’t my cup of tea. Yea, SURPRISINGLY I’m selling Apate and Moros… yet again. I know, I know. I should’ve known that it would come to this since I’ve made this kind of a cut before… sold all my fantasy dolls except for Nyx – and Seth, because he’s so tiny I even forget that I have him. :’D But yeah…

The reasons are more or less the same as before… well, this time I’m not unhappy with the dolls themselves, Emma and Kyron both are super lovely. If I had tons of extra money lying around, I’d keep them just because they’re pretty. But I don’t have that luxury, so someone has to go for me to be able to make new plans… and it sure as hell ain’t one of my human characters, so that leaves Emma and Kyron as the only disposable ones. 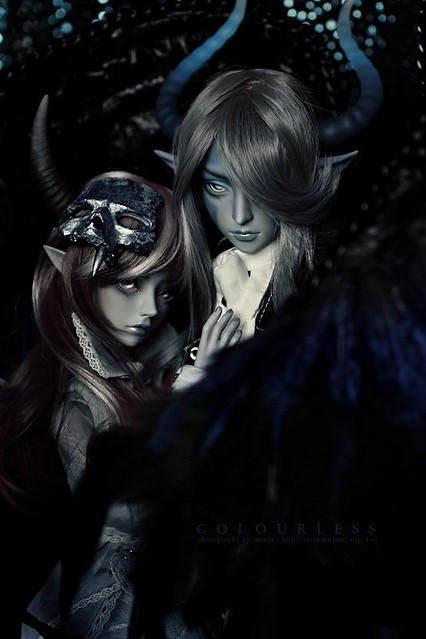 Mainly why I can’t keep myself interested in my fantasy crew is because 1) I lack the skill to make them all these fancy outfits that I have in mind 2) their characters are somewhat… shallow to me. Since I still haven’t gotten around to writing out their story and I don’t RP them the way I do with my human characters. And usually when I buy a fantasy doll, it’s some limited super special one and sometimes you can’t replace them… I just keep fretting over how much money I have on that doll and I’m too nervous to take them to places because hey – what if something breaks? I can’t really enjoy them to the fullest, you know… I adore those special resin colours and gray resin is such a delight to photograph, but… damn.

Maybe one day if I win the lottery, or, like, find a proper job, I can afford to keep all three of my storylines alive in doll form but right now it’s just not possible. So I keep asking myself, why do I keep forcing this on myself? On one hand, I regret that I went back to the limited doll loop… on the other hand, I’m glad that I tried. And saw that it’s not working out. Otherwise I’d probably keep thinking “what if…” and it would be hard to keep from getting swayed by all those fancy limited dolls. Like, the first two weeks I’m over the moon and then I get bored… I’ve lost count of how many weeks I’ve had Moros in pieces waiting for me to re-string and suede him. Hasn’t happened. Now I’m struggling to have the interest to put him in one piece so that I could take sales photos, hah. x__x I already have a buyer for Elf Emma, so she’s ready to go once I get the payment…

However, I think later on I’ll get a human Emma because I love the sculpt a lot. As soon as I figure out what body I could hybrid her on. xD Because I realised she’d make the perfect sculpt for Aimi’s girlfriend, Yuka, and I want her to be taller than Aimi… so they can’t both have the Withdoll body.

BUT ANYWAY. There’s one more reason why I’m selling these two: I’ve also come to the conclusion that it would be better for Apate and Moros to be 60cm+, so that I could photograph them with their mom. That would bring my crew together much better… 43cm and 47cm range dolls don’t work too well with a 65cm woman. ^^; So, now it’s just a waiting game ’til I find sculpts for them in SD-size. Hopefully it’ll take a few more years because I so can’t afford to get those now, lol. xD

Yeah, that’s pretty much the deal… expect a fantasy doll hiatus for a few years. I’m done being a masochist for now, I want to give more love to my human characters (because they deserve it). ♥

And also… as if it hasn’t been obvious from my photos lately… I’ve fallen hard for Azone Pureneemos. They’re so much more inspiring to me right now than BJDs, so WHY wouldn’t I concentrate on them, when they bring me so much joy? And also figures… figures everywhere! This year is full of all kinds of lovely releases, I don’t know what to put my money on, lol! x’D May will be MAYHEM for my bank account, I tell you.

My neemo family will be gaining some new additions soon, hopefully… and I’m also dying here, because. ;^; Azoneeee!

I haven’t been that keen on the boy Azones, but… gosh, this new release of Aoto is super cute. ;__; I’d love to get him as a little brother for Yumei, but then again… I have some not-so-cheap figure pre-orders to be released in March-April and apparently the Detective Yuuta and Aoto will be April releases… >__< So I'm not sure if I can afford him... and then Yenna put this thought into my head: what if he wasn’t smiling. OH MY GOD! Tsundere little brother~ ;A; Then he’d remind me a lot about one of my OCs, Seiga… and that thought is so irresistible! But Aoto isn’t grumpy, he smiles… so I suppose I’m safe. But now I can’t shake the thought of a grumpy Aoto. PLS NEVER MAKE ONE AZONE! I wouldn’t be able to resist him for sure then… but he really is cute. ;^; I guess we’ll see… if I cave… or not… “””oTL

And then that Purimyure Yousei Kyoukai version of Vel… I wasn’t sold on their stock outfits, but then I saw that photo of her modelling that white sailor dress! Twintails! Too cute! I think I have to order her… I already bought some Picconeemo D-size dresses in storage, too… >.>;;; I’m very good at trapping myself, apparently.

… this is one mess of a post, sorry. xD To make this even more of a mess, I’ll list my current anime favourites here! \:D/ Well, I’m watching a few other shows, too, but these I like the best at the moment.

Akatsuki no Yona
A shoujo series where the heroine has actual character development, omg! This is a rare treat. It’s pretty funny, too, although sometimes the pace can get a little slow and the animation/art sucks at times. But it’s definitely a good series. Refreshing. Yona is voiced by Saitou Chiwa, my princess~ ♥ And there are other nice voices as well. Plus, Hak is hot. ♥

Death Parade
I started watching this because WOW AMAZING OPENING SONG! But it has an interesting setting. And again, a nice cast – heck, I wouldn’t watch anything without my favourite seiyuus these days (). At first it may seem that the episodes are following the same pattern, but soon you’ll see that there’s more to it than you might think!

Kamisama Hajimemashita
Another shoujo that has a very likable heroine (basically, she isn’t helpless and whiny). Funny as heck, plenty of talented seiyuus – interesting characters. Did I mention funny? Because it really cracks me up (Kishio, don’t even get me started on you, you dork). What’s currently airing is the second season, so you should find the first season… first. But it’s definitely one of my fave shoujos ever~ ♥

Shigatsu wa Kimi no Uso
Because I’m a sucker for tragic love stories, even though they rip my heart into pieces. And classical music is lovely. Youngsters trying to find their place in the world. That kind of stuff. Some of the minor characters make me want to pull my hair out but I love the hero and heroine. OTP foreverrrr! ♥ And this anime has a beautiful OST!

I lovelovelovelove that song. ;___; ♥ ♥ ♥ It reminds me so much of Shionari (Roaring Tides) from CLANNAD and that is my #1 tear jerker song. Seriously, I can’t even listen to it (or its variations, really) because it makes me bawl my eyes out.

CLANNAD anime was horrible (way to completely butcher it by stuffing all the girls’ different routes as side thingys in Nagisa’s route, I did not appreciate), but the visual novel is amazinggggg! ♥ I’ve never cried as much in my life as I did while I was playing that. Tragedyyyyyy. Clearly I’m a masochist. And while we’re on topic of sad/touching stories, I did bawl my eyes out at Tokyo Magnitude 8.0‘s latter half… that series wrecked me so bad, ughh. And so did the movie Ookami Kodomo no Ame to Yuki, actually. I hardly ever cry at anything, but when I do, it’s horrible. Watching Kaze Tachinu in the movie theatre was a bad choice, too, because UGHHH. I don’t like crying in front of other people so I had to do everything in my power not to bawl like a baby when I left the theatre, lol. xD