My Souldoll Vito Berial arrived today~ I ordered him back in December with layaway and he was originally supposed ship mid March but then I messaged Souldoll asking if they could delay his shipping since I wouldn’t be at home around that time. They told me that his shipping would be delayed into late April-early May anyway, as they’d had problems with casting the Sandy Brown resin. But I knew to expect that, since they’ve said in the past that Sandy Brown is difficult to manufacture, and I also once asked Withdoll if they could make their Real skin in Urethane resin as well, and they said that they can’t because it’s really difficult to manufacture. So there’s something really difficult about light tans. But I really didn’t mind waiting because to me it’s more important to get a perfect doll than a rushed one. Souldoll thanked me several times for being so understanding, haha. xD But yeah, I would’ve wanted him to ship later anyway, so it all worked out fine. I’m grateful to Souldoll that they even manufacture this kind of difficult light tan in the first place, the wait is no problem if I can get the perfect shell for my character!

But yeap, he was shipped last week’s… Thursday I suppose. And then he arrived in Finland for May Day, so obviously they didn’t do anything about him. Well, I did wait a couple of days before paying the ransom money ’cause I got the new Withdoll girl on Monday and was plenty busy painting her already (gahh I need to find the time to make a blog post about her too), lol! Too much resin at once! Somehow the dolls always arrive at the same time…

The mailman came super early today, apparently I was the first customer of the day ’cause he had a whole bunch of packages and almost couldn’t find mine. xD He even had to climb inside the truck to dig it out from under the other packages in the furthest corner, ahah! Poor mailman. But he was really friendly and cheerful and didn’t mind. :’3

But perhaps now I’ll move onto the photos: 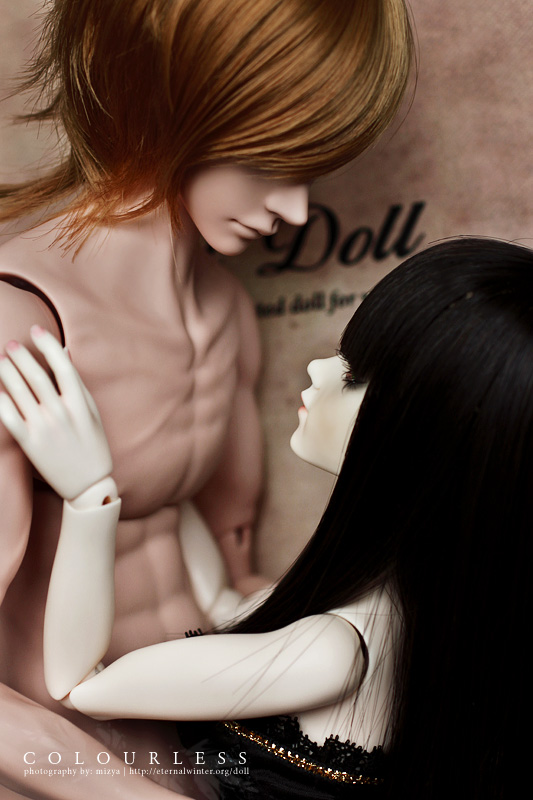 Saki certainly was happy about her husband. :’D Then again, he’s pretty hot so I can’t blame her, lol~

Originally it was supposed to be a rainy day, so I didn’t think that I’d have a chance to paint him until next week… but the rain never came, so I decided to try doing a face up for Yoshiki, since it would be fairly simple anyway. At first it was waaay too light and then I darkened it… and now I wonder if it’s too dark. ^^; It’s kinda messy, too, so I’ll have to re-do it later in the summer. Also, despite bevelling his eyewells, the Souldoll eyes just went black in him, so I dug out these light brown Mako eyes… they’re pretty dark, too, but at least they don’t look completely black like the Souldoll ones. :D;;; 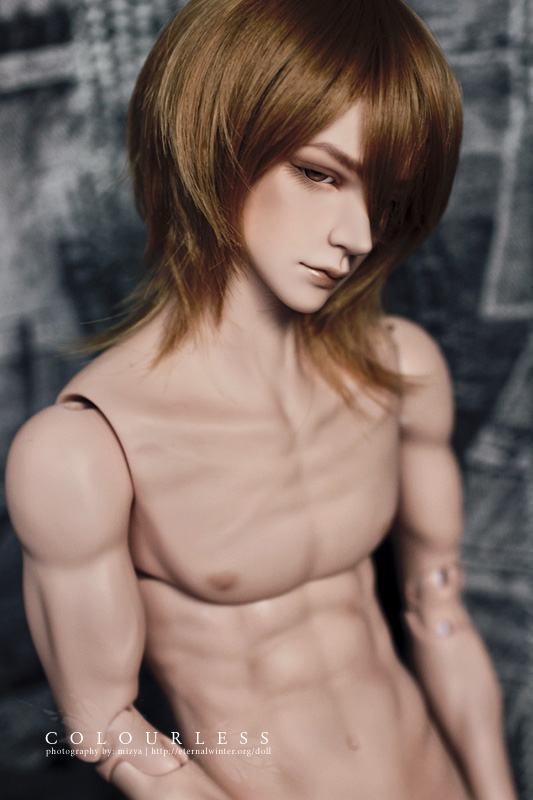 I struggled to get a good photo of him, because his wig is idiotic. I was under the impression that Vitos wear 7-8inch wigs so I bought that size… but Berial’s head is definitely closer to 6-7inch, so I need to get him a new one. Well, this one is too light brown after all, I thought that a lighter wig would make his skintone appear darker and a dark wig would in return make it look much paler, buuut… I do think I need a medium brown wig for him after all. This one looks like a bad dye job, haha! xD His chest joint also makes photographing him difficult… it looks pretty ugly from most angles, ugh. ;__;

And yeeeaaahhh, he needs some clothes and shoes. Nothing that I have fits him, lol. xD;; I don’t have any 60cm boys so I don’t have any shoes that I could try on him… my 70cm male dolls’ shoes are too big and 40cm boys’ shoes too small. His feet are actually bigger than grown up!Yun’s, lol~ His hands are quite small for a Souldoll male doll, imo, the Zenith guys have huuuge yaoi hands and Hisoka’s NL body has big hands too… so I was surprised that these are so small. They’re almost the same size as the Narae hands, ahah. xD;;

But yeah, more about this guy once I get him a proper wig and some clothes. Not that it would be a bad thing to keep him naked (look at those upper arms especially huhuhuhuhu), but perhaps I’ll make him some clothes so that whenever people visit me, they won’t be freaked out by naked dolls, lmao! :’D

And one more photo with Saki because I caaannnn~