I have three other arrivals that are backlogged but I figured I’d post this one now before it ends up on the list of drafts that I should finish writing & publish, ahah… ((´∀`;))

But yeah, this year’s summer Withdoll released their first 60cm girls, I made a blog post about it: here. ( ´ ▽ ` )ﾉ Me and Yenna were able to receive the girls a bit earlier so that we could give Withdoll feedback about the body and show some owner photos in time for their official release. I got Cecily and while she was pretty, she looked really young when I got her… sooo I couldn’t make her into Apate like I originally planned. (｡•́︿•̀｡) A few months later Withdoll released Adriana and I fell in love. She had such a pretty face and seemed more mature than the first two girls, so I thought that she should work for Apate much better~ ₍՞◌′ᵕ‵ू◌₎♡

Since I already had my prototype Cecily, I asked Withdoll if they’d agree to sell me just Adriana’s head because I couldn’t really afford to buy another full doll – and luckily they said yes! You could say that me and Yenna are sort of like their PR people, so I suppose that’s why we sometimes get a chance to make orders that wouldn’t be possible for regular customers, ahah. (･∀･；) And, well, we’re also good friends with their photographer/Q&A rep, so that helps too. I once asked that if I get to visit Korea someday, would it be possible for me to come see their workplace and immediately they were like “Yes, please come!!”, haha~ (๑´ㅂ`๑)

But let’s get back to the package that I got:

Then I had to assemble the body because I disassembled it… a couple of months ago(?) to suede and restring it ’cause me and Yenna got the upgraded leg & feet parts from Withdoll. They made some changes on the legs based on customer feedback and made the feet bigger according to our suggestions – because when we got the dolls their feet were TINY. All SD-sized shoes were huuuge on them and I even managed to fit the feet into a pair of Latidoll MSD sandals… yeap. (-∀-`; ) Thankfully Withdoll made the feet bigger so that the dolls have better balance AND the feet now fit SD16-sized girl shoes much better, too. Yay!

… but yeah, I sueded the body one evening and then lost interest because I haven’t felt too inspired with Cecily and her babyface… so the body’s been in pieces for, like, almost two months now, ahah. You can tell when a doll doesn’t inspire me at all – I don’t even feel like touching them let alone make clothes for them. (･∀･；) But now I have the lovely Adriana head, so I was inspired to put the body back together~ I really hate restringing, though. I’m not afraid of doing something wrong while restringing but I just don’t like doing it. At all. (ーー;) Now after being in the doll hobby for a decade, I’m starting to think that I should probably buy a restringing tool and see if that would make me a little more motivated to restring my dolls. Usually people buy stands and restringing tools when they start the hobby but nope, not me… I was so determined to make do without stands and restringing tools but now I’ve become too lazy, lol! (*≧▽≦)ﾉｼ))

While I assembled the body, it got super dark. But I wanted to take photos of the Adriana sculpt because I took blank photos of Cecily & Margery too. Posted those in the Withdoll blog: here. ー( ´ ▽ ` )ﾉ

Now I just have to wait for a clear and dry day… it’s been rainy for daaaays and today it was really cold and we had this icy rain, ughh. (；￣Д￣） I wore just my leather jacket today and I was sooo cold. (ノ´ロ`)ノ Definitely need to put on a warmer coat the next time I go out, brr! Hopefully we’ll get some snow soon, it gets dark so early and it’s pitch black outside… snow would bring some light at least. It’s the darkest time of the year now and it keeps getting darker until Christmas. After that the days will slowly start getting longer again. I love winter as long as we have snow, a rainy and black winter sucks so much.（；へ：）

Oh, and in case there are readers who arent familiar with Apate’s history, I’ve had her twice before in 40cm size: first as Withdoll’s Dark Elf Angela and then as Elf Hunter Emma. Eventually I decided that I’d rather have her in 60cm size because her mom is Soom Vesuvia that is 65cm tall and I could never photograph the 40cm children with her because of the difference in scale.

Here are photos of old Apate: 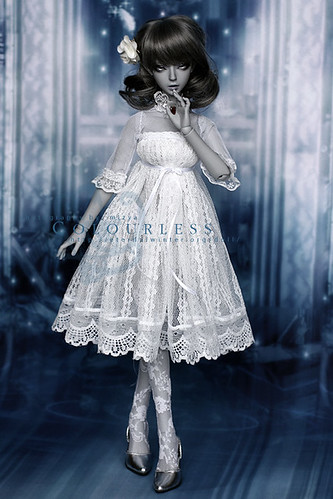 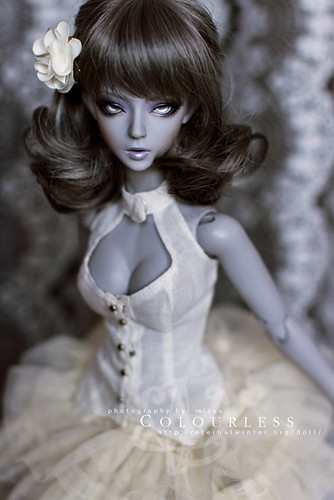 These are of her first shell, Dark Elf Angela 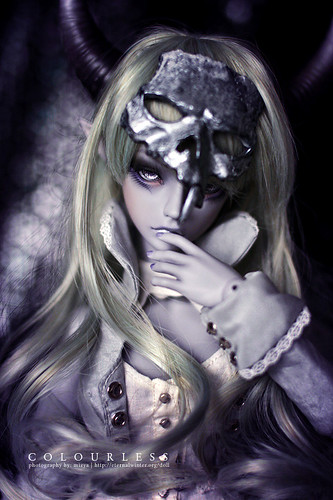 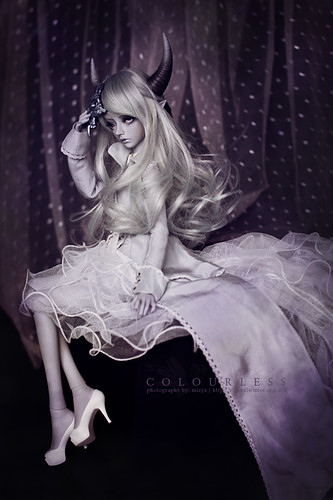 And these are of her second shell, Elf Hunter Emma

I really loved her as Emma, but the size difference with her mom was problematic… now I’m only sad about the fact that she no longer fits her beautiful uniform made by Yenna and she can’t wear that cool skull mask either… too small! ( p′︵‵。) I seriously hope Withdoll will make a skull mask for the bigger girls, too. Apate has an obsession with bones and she likes to collect the skeletons of her victims… she’s a bit insane, just like the rest of her family, lol.（ ´∀｀）