It’s been a rainy week again and today was supposed to be rainy, too… buuut the sun was shining and I figured that, well, I could do some customising as long as there’s no rain. I picked up Lalage, my DollZone Big Dipper, because I thought that blushing her should be the quickest & easiest customisation to do with a limited time. And she’s been waiting in her pouch long enough for me to blush her, ahah! I did decide on a name for her in the mean time, though, so that’s something at least! xD I was supposed to go with a plant/nature related name, but in the end the cutest one stuck even though it doesn’t really have anything to do with her origins, lol. Oh well…

But yeah, I juuust managed to finish her blushing before it started raining, yay! \o/ I took some WIP photos while I was working on her:

After the second stage I darkened her hooves, nose and added some more pink blush all around. I blushed her in one piece because I came to the conclusion that she’s even more complicated to restring than my Doll Chateau Russel, Io, who is still in pieces and unblushed… ^^; So I didn’t want the same thing to happen with Lala. It was much more simple to coat her this way, I would’ve lost interest already at that point if I’d coated each little piece a few at a time… not to mention, I would’ve ran out of time, too, blushing all the pieces separately. Maybe that makes me a bad/lazy doll owner, but whatever, lol~ XD

I wanted her to have a very earthy colour palette. In spring I was inspired by the apple blossoms with a tiny bit of pink on white, so I decided to use those colours for Lala. She’s mostly kept her white colour, but I added a touch of pink and green on the flowery/leafy parts of her body and used dark brown for her horns and hooves. I also added a bit of green to the “thorny” parts of her horns, to make them seem like budding leaves. I’m quite happy with how her blushing turned out. :3

It started raining literally the minute I got her ready, and thus it’s been pretty dark so I didn’t get any proper photos of her all done… just one really quick shot. She’s still missing her correct eyes, too, these Soom eyes that I had don’t suit her well, but they’re the only ones light coloured enough for her to wear – the eyes I received with her are way too dark. :S 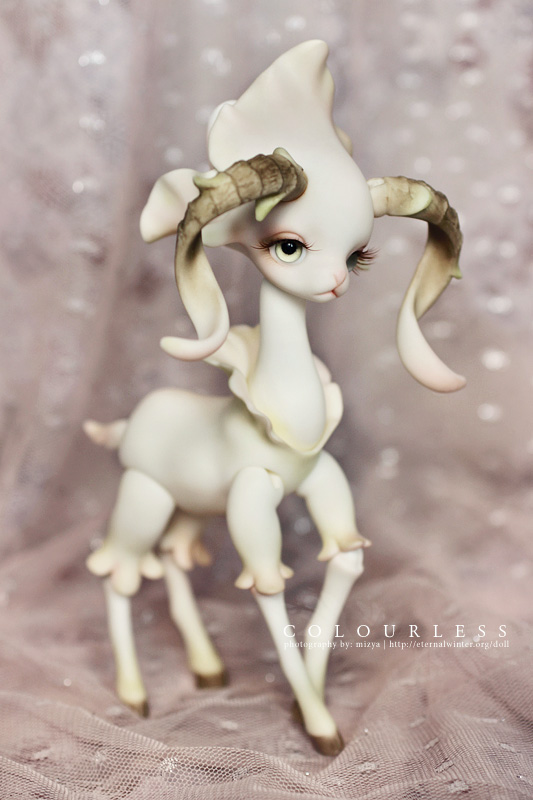 I ordered eyes for her and little sheepy, like, over a month ago from Captured in Glass. A week ago I emailed to Lu asking for a shipping estimate, and I received a reply that the eyes had been shipped out a week ago and they’d call the PO to find out the tracking number. Well, I never heard anything back and just now I was complaining to Yenna on IRC about it, and lo and behold – 10 minutes later I get an email from Lu, finally containing a tracking number. Seems like the eyes are in Finland and in the neighbouring city, so hopefully I can go pick them up tomorrow from the PO. Unless they screw up something… but fingers crossed! >u< I ordered light pink and lilac eyes, I'll have to see which ones suit her the best... although now I kinda wonder if I should've gotten light green eyes for her. The colour of these eyes looks nice in her, but I don't like the eyes because they're silicone, so she can't keep them. Hopefully I'll find out tomorrow whether I'll have eyes that suit her or not.