When I ordered Moros’ new shell I thought that I’d end up getting him only for my birthday ’cause I paid with layway, but… unlike most companies, Souldoll apparently doesn’t wait until the layaway is fully complete before they start filling out the orders. Which is rather nice of them. When you’re prepared for a long wait, it’s definitely only positive if your doll ships earlier, haha. xD ♥

But yeah… I wrote about my worries earlier this week and unfortunately… what I feared ended up being true: he’s very lilac and not gray at all. x__x I hate this kind of bright lilac colour, and it looks especially awful as a doll’s skintone. x_o;; Sorry to those who love the colour, but… it’s really not what I expected. At all. I’m a little disappointed with the doll because of the skintone. :S But he’s really pretty, so I doubt I can bear to part with him even if his skintone is awful. I just have to Photoshop the hell out of his photos. xD;; And leave him under the window so that he’ll hopefully turn more gray when exposed to the sunlight, lol. Definitely not coating him with MSC UV-cut. :’D 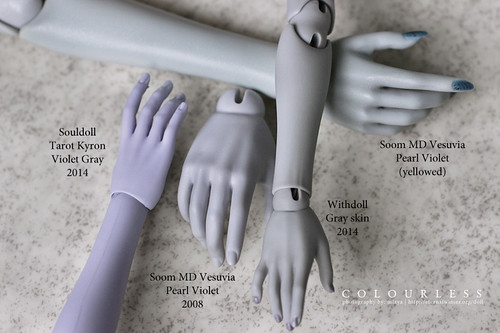 Click on the image to view it in bigger size

Luckily the postman carried the package to the door this morning… I was so nervous thinking what if they don’t try bringing it at all (’cause sometimes they’re lazy assholes) ’cause my knee’s been hurting again lately and the package was HUGE and weighed almost 5kg. My knee wouldn’t have been able to handle carrying it back from the PO, I’m sure. :S But luckily the same friendly postman who brought Kotori yesterday came again today. I only had to drag the package up to my apartment, although thankfully we have an elevator. xD

But yeah, I got lots of stuff with him so I have a lot of photos to post:

And here’s a teaser photo that I put a little more effort into… Photoshop definitely helps with the lilac. xD;; Thankfully he’s blue themed so excessive Photoshopping suits him:

I’m a bit nervous about painting him because his previous incarnation’s face up was done by my talented friend, jesmo. And it was ridiculously pretty. ♥ My face ups are so crappy in comparison, lol… but well, especially after I had to snatch the Usagi-san Miu, I don’t really have any extra money to commission a face up for him. So I’ll try to paint him myself… if ever we have some lovely days with no rain. It’s way too humid, I don’t even dare to try painting him with this weather. :S

He’s also gonna need some mods… because the NL body has those stupid joints, they don’t have normal ankles either. Sooo I’m gonna have to butcher his human legs in order to use the Withdoll leg armours on him. ’cause they’re lovely and I’m not giving them up. ♥ He wouldn’t be able to wear his uniform due to the long pants with the Souldoll boots, so… that’s one reason why I need the Withdoll leg armour. I have no clue what to do about the headgear, though… the horns look rather stupid without it and I really loved the double horned look anyway… but those damned unsymmetrical ears. :S I’ll have to see if I figure out some alternative way to get the headgear to stay on…

And the wings have that super heavy resin part at the back and then some lameass belt-harness thing to keep them on the doll… well, the resin part and the wings are waaaay too heavy for the harness. :/ So the wings droop. A lot. So I probably have to buy some huge ass magnets and drill them onto the resin part of the wings and then put magnets inside his torso or something. ’cause as it is, the harness is pretty useless… I don’t understand why they didn’t use magnets more for the option parts. Like, for the skull mask I couldn’t figure out any other way to wear it than to secure it on his ears, I guess that’s the point, too… but somehow it’s a real pain to put on ’cause it gets tangled on his ears and it’ll probably scratch his face up too mrgh… I much prefer Withdoll’s use of magnets.

And the wings are really lovely, although I didn’t even twist them around much and there was already wire poking out. :/ I managed to get it back inside so that it doesn’t show, but occasionally it peeks out when I pose the wings. So that sucks a bit too… otherwise I really love the wings ’cause you can pose them however you want, they’re so flexible. *___* ♥ And those blue feathers are gorgeous! I wouldn’t have bought the wings otherwise, but because they had blue feathers, I had to… xD Blue is Moros’ colour, after all~ ♥

Oh right, I also requested these eyes because Kyron’s default eyes were red/purple, but Moros should have pale blue eyes. Thankfully they remembered my request and I got them. :3 They’re really lovely, half of them is darker blue and half light blue, but I can position them so that only the pale blue shows~ They’re very close to the Soom Rosette eyes that he had as Juwel. I’m very pleased about that! ♥

But despite everything I still like him as a whole, so I doubt I’ll sell him nor any of his stuff…… except for the gift outfit that I got. It doesn’t suit Hisoka and definitely not Moros. ^^;;; I wished they’d sent some of those casual cargo pants instead, I could use some pants for Hisoka. *sigh* Oh well…

After years of dreaming