I’ve been busy and tired this week so I’ve been holding off some blog posts… but then I figured that it shouldn’t offend anyone if I combined the two posts that I’ve been planning into one. Especially when it’s neemos and Dollfie Dreams, since both are anime-aesthetic. And cute. Everyone loves cute things, yes? ((´∀`;)) But I’ll keep all this anime stuff separate from the BJD posts, ’cause I know not all BJD people like anime/manga. Unfortunately I’m a big nerd, ahah! （￣ー￣；）

But anyway, first I’m gonna squee a bit about the incoming Azone yukatas~ Ｏ(≧▽≦)Ｏ Because traditional wear is my weakness, haha! ♥

I think I need to get some of those shorts, too! Of course, the swimsuits and dresses are cute as well, but I’m convincing myself that I don’t need any of them because I might as well make something similar myself. (-∀-`; ) That ruffle top idea I definitely need to steal and make something similar for Kasumi~ ヽ(｡･ω･｡)ﾉ ♥ It looks lovely on that LL bust, ohoho~ ლ(́◉◞౪◟◉‵ლ) But the yukatas are suuuper cute, I’m having a really hard time deciding which ones to buy. I WANT THEM ALL!!! (ﾉ)´∀｀(ヾ) ♥ ♥ ♥ Thankfully I don’t have any boys yet, so I probably don’t have to buy any of the boys’… but Aoto looks so cute in that yukata. Augh! Also, they’ve made such cute braided hairdos for the girls, I nearly died at Yuzuha and Chiika~（*´▽｀*）I also like Miu’s hair cut as a short, wavy bob. It’s super cute! ♥ And Himeno’s twintails are adorable too~ (“⌒∇⌒”)

But Yuzuha is definitely so darned cute with the braids, that I just had to try that same style on my Yumei! 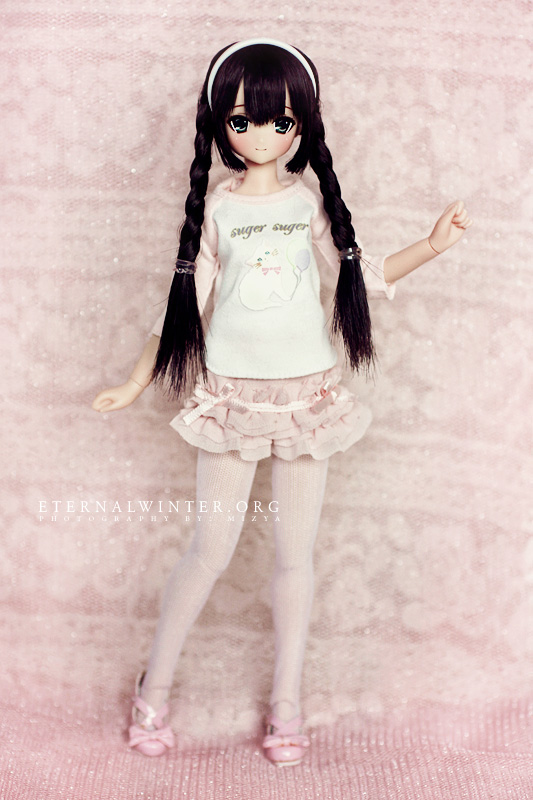 Now I kind of want to braid everyone’s hair, lol! But maybe I’ll try to hold back that excitement. (;´∀｀) Yumei will keep this hairstyle for now, though. I need to make ribbons for her, just like in Azone’s photos~ ♥ There’s a Japanese user on twitter who I’ve seen create similar hairstyles for their dolls, I wonder if they are a member of the Azone staff… it would be quite a coincidence for Azone to use the same custom hairstyles on their promo photos.

Right now twitter is full of photos from the Azone 10th anniversary festival, there were a bunch of cute custom dolls! (´ ▽｀).。ｏ♡ These moe tsundere Raili and Aika are probably my favourites:

And I adore these Aika twins and their gorgeous dresses!

Άρτεμις on flickr has a bunch of photos of most of the dolls~ I recommend checking them out!! ー( ´ ▽ ` )ﾉ 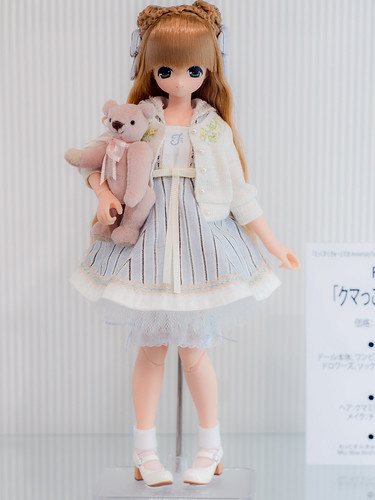 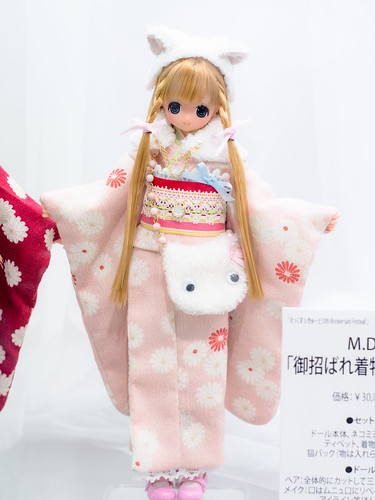 That concludes the neemo part of this post… I’ve been mainly playing with Ume this week. Mostly sewn for her and then taken photos and spammed them, like, everywhere. But I can’t help it, this girl is soooo cuuuuteeeee!!! ヽ(；▽；)ノ My sweet princess~ ♥ Here’s what I’ve made for her: 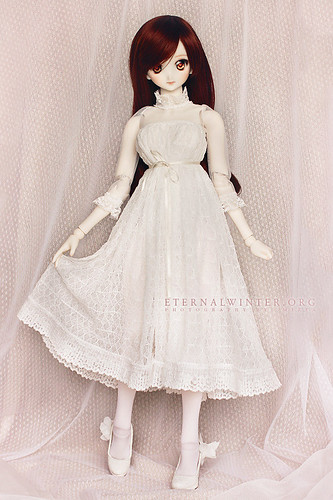 First I made that striped sweater on Tuesday, when Yenna was visiting me to dye her Souldoll Justitia armour set. The dyeing process took quite a while, so I figured I might as well sew while she was working on that, haha.（ ´∀｀） The sweater goes well with the ruffle skirt that I’ve made for Ume earlier. Yesterday I made that white dress… it’s heavily inspired by a Sadol dress that they no longer sell, called Yellow Garden. I purchased it in Unoa size a while back, and would’ve loved one in SD-size as well, especially now that I have my DD girls – but unfortunately Sadol hasn’t sold it for a few years now, and I doubt they’ll bring it back. So, I was a very sad panda. (´；ω；`) And yesterday I decided to try if I’d manage to make at least something similar to the white under dress, because I really love that dress so much… obviously I don’t have the exact same fabrics and laces, so it’s not a perfect copy (and my sewing skills aren’t as good as those of the Sadol staff lol), but it wasn’t meant to be either. I always feel a bit bad about taking a design and making my own version of it, but I think it’s somewhat okay as long as I don’t try to profit off of them? (;´∀｀) Just make those clothes for my own dolls. And naturally I also list my source of inspiration, if I do something like this.

But yeah, I took photos of Ume since she got new clothes. They’re quite similar and just portraits, but her face is adorableeee! (づ￣ ³￣)づ ♥ ♥ ♥ Once the scenery gets a little prettier, I’ll take her out. I already wanted to take her out today, but then I thought that the scenery wouldn’t be pretty anyway and I’d surely run into some drunkards celebrating May Day’s Eve, so I decided to stay indoors. Already going to the grocery store was enough for me, too many people!! Σ(゜゜)

In the two latter photos, you can see a bit of the decorations that I added later last night to Ume’s dress. I’m too lazy to retake the fullbody shot showing the dress, ahah… and she’s borrowing Yun’s wig now, ’cause it’s closer to the colour that I want her to have. And she definitely needs a ponytail wig, I planned ponytails for her since the beginning~ ♥（ﾉ´∀`）But it’s hard to find cute ponytail wigs ’cause I’m picky about the style and colour, lol. Here are the selfys that I made of my twins’ ideal styles some weeks ago:

I learned that there will be a meet for Dollfie Dream owners on the 16th of May. I don’t know my May schedule fully yet, but I hope that I’ll be able to travel to Helsinki. It would be lovely to meet other DD hobbyists and see different dolls IRL~ ♥ Especially if someone brought a Smartdoll with them, I’d be very curious to see one in person! I asked my brother and he was okay with me visiting that weekend… but I’ll have to see if it’s possible or not. Hopefully it will be! ヾ(＾∇＾) I’d love to see the cherry trees in blossom as well. ♥ I hunted for them a couple of years, but then gave up because I was always either too early or too late, ahah.

Happy May day everyone!!! ヾ(＠^▽^＠)ﾉ I’m going out with friends tomorrow, I’m really looking forward to it~

PS: I must say to my fellow anime nerds: if you’re not watching Ore Monogatari!! yet, WATCH IT NOW! This show is gold, I tell you!! (*≧▽≦)ﾉｼ)) Definitely best from the new anime that started in April 2015. ♥ I’m not really watching anything else right now… except Daiya no Ace since they finally started airing new eps, no more recaps yaaayyy!! My baseball bbies, and especially my precious adorkable bby Bakamura~ (ღ˘⌣˘ღ) ♥