Eheheheheheheh~ (´∀｀) ♥ I ordered myself something cute as a Christmas present and the package arrived today. As usual, I made a box opening and took some silly extra photos as well. But first, here are the box opening photos…

Yeah, so this is Kotori.（*´▽｀*）♥ She’s Ex☆Cute Komorebimori no Doubutsutachi Usagi-san Miu. In Japanese: えっくす☆きゅーとこもれび森のどうぶつたち♪ うさぎさん/みう. I’ve been hunting down this particular version of Miu since April or so… before I seriously started looking for one, I had no idea that she’s so difficult to find on the secondary market – at least if you want to buy her for a reasonable price. So it took me several months checking various (mostly Japanese) websites daily looking for one that didn’t cost a fortune and was in mint condition. I’m really particular about the condition of the hair and clothes, but I don’t mind any damage to the boxes since I’m not a collector-collector who only keeps them in boxes.

But yeah, there were a few good deals occasionally on Y!J or so, but they were either on days when I gave up looking OR they were listed, like, on Friday evening and the auctions ended on Sunday. (~_~;) I have no means of transferring money to my PayPal/credit card on weekends. Basically every other Pureneemos they listed for sale on every possible days of the week, but the few Usagi-san Mius were ALWAYS put up for the weekends. Always. So I was quite bitter when I had to sit back and watch the auctions end… and I was especially bitter when I’d taken one day off from stalking, of course she popped up for sale and then somebody had already managed to buy her before I noticed that there even was one for sale. ヽ(￣д￣;)ノ

So I’ve been going quite insane trying to get one… well, there’s been one for sale at 42000yen for a long time, but I thought that I’d rather not pay that much, considering the original price for these dolls is around 12000yen. But after so many failed attempts (I’m sure I’ve missed out on her five or six times during these past months) I started thinking that I don’t even care anymore, I just want to get her home because I’m so tired of doing the daily stalking. And when I was close to deciding to buy the really expensive one, behold– Usagi-san Miu popped up at Mandarake for 30000yen. So I snatched her up right away. I just don’t have the energy to keep stalking for cheaper deals… and well, they’ve usually been around 25000yen anyway, so it’s not like I ended up paying a lot of extra compared to that. Especially since she slipped through customs, eheheh, luckyyy~ ♥（ﾉ´∀`）

It was my first time ordering from Mandarake, but everything went smoothly… I’d emailed the Nagoya staff once before asking about Usagi-Miu so I was familiar with contacting them in case I needed help. But I finished the check out with no problems, received the invoice on the next day and had five days to complete the payment. Once I paid, they shipped her out the same day – and she arrived in Finland in two days ’cause EMS from Japan is pretty fast most of the time. And as you can see from the photos, she was very carefully packaged and in great condition. (*^▽^*) They’d listed her as “unsealed, box damaged” but I didn’t really see any damage on the box, lol.

That’s pretty much all I had to write, I think… I’m sooo happy to finally have this cutie home! 。(⌒∇⌒。) And Kotone is happy to have her little sister here, too, haha~ Sadly we’re still having gloomy rainy days, but hopefully this weekend the weather will get better and we get some snow, so that I can take Kotori out for a proper photoshoot~ ( ´ ▽ ` )ﾉ She does have an actual coat, after all. 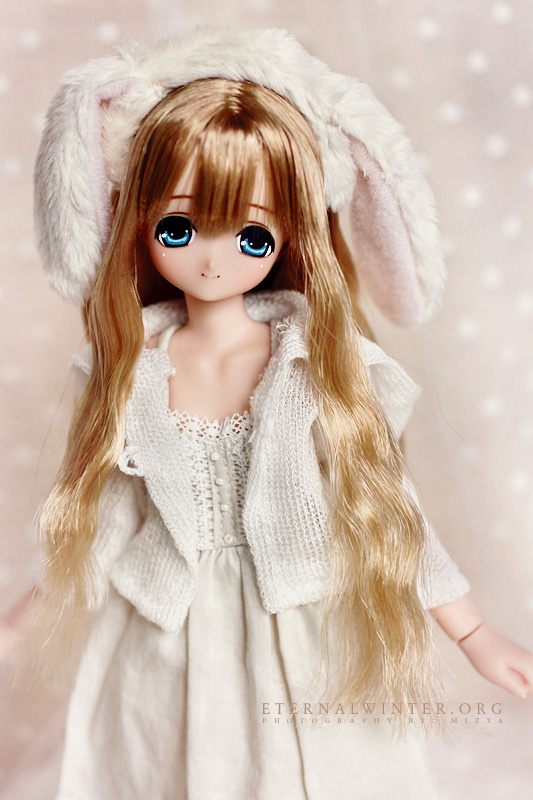 Oh and because I’m a linguist (nerd), I have to talk about her name! ヾ(@°▽°@)ノ I wanted a name that would be similar to Kotone since they’re sisters. And Kotori can mean “a small bird”, so I figured it would be an appropriate name for a younger sister. But for the kanji, I didn’t want to make the obvious choice, ahah… and I chose the writing “寿璃”. The first kanji is the same as in Kotone’s name, and if I’ve understood right, it means long life or something along those lines. And the latter part is the kanji for lapis lazuli, which is a beautiful blue semi-precious stone. I thought that it’d be really appropriate for her, because she has those pretty blue eyes that I love so much, haha~ (´ヮ`)

The Arrival she never had