I got one package in the morning via EMS and later during the day I found out that I have another waiting for me at the PO, so this ended up becoming a double arrival after all. ヾ(｡^ω^｡)ノ For once they were quick with package number #2, usually they like to keep the airmail packages as hostages for days…

But yeah, first up is a figure I snatched from Mandarake, Kotobukiya’s Levi. I was looking at this particular figure at Tracon X, but it costed 130 euros there so I hesitated… based on the original price, it wasn’t too expensive if I were to count customs and shipping fees, too, but still… I didn’t end up buying the figure from there. I was very tempted and there was this chick who really tried to advertise it to me, but I stayed strong… !

… and it’s a good thing I did, because now I found it for 8000 yen on Mandarake. A much better deal!╰(✧∇✧)╯

Happy to have (yet another) Levi at home, yaaaaay! ヾ(＠°▽°＠)ﾉ Clearly I have a “collect all the Levis and Mikasas” thing going on. Too bad I don’t like Kotobukiya’s Mikasa, because they put her into this stupid booty-out pose, grr… and her face isn’t nearly as pretty as GSC Mikasa’s either. Well, I am selling the FuRyu Mikasa figure, too, so my collection will lose one member once I get that sold… but well, SnK is pretty popular so there’s a chance that at some point there are going to be more figures that I want.

I really want figures of Armin, Jean and Annie but we’ll see if that ever happens. RAH Armin and Annie are so wonderful, but too expensive for my budget… and I’d rather have just figures anyway, not doll-figure-hybrids, lol. I’d even take figmas! Okay, there ARE figures of Armin but their faces and hair are somehow off… the RAH Armin is the only one that looks good to me. And then figma Armin was limited and is hard to find. *shakes fist* Cruel, cruel world… Armin is my faaaave! He’s a perfect example of damn good character development! It’s kinda funny that the same series that has a character like Armin can have someone like Eren as the protagonist, ha ha ha… he’s so one-dimensional and has pretty much zero character development. But then again, most shounen series have awful protagonists (like Aquarion EVOL drove me nearly insane – coincidentally that idiot protag was voiced by Kaji Yuuki just like Eren is. I hate Kaji Yuuki, he has no talent at all and his voice ticks me off).

I could go on forever about how great characters Armin and Levi are, for real. There are people who dislike them, Armin because he used to be a pathetic coward (keyword being USED to be) and Levi because he’s “too strong” and cold and violent or something because there was that scene where he beat up Eren. I’m just like… … are you people reading/watching the same show as me? Clearly not. Just because Armin doesn’t rush head first into everything (like Eren) doesn’t make him a coward… although, YES, he used to be rather pathetic in the beginning and I didn’t like him at first because of that. But he’s clearly matured as the series progressed, but he’s also clever and smart, so he thinks before he acts. And Levi is probably one of the most well-written and complex characters in the series. Like, honestly, no one cares as much as Levi does. Like, sure, he’s got that whole grumpy thug look going on and uses very coarse language, but there have been several scenes where you can tell that deep down he is a caring person. He probably cares too much even, you can see how it’s taking its toll on him as the series progresses. And yeah, he’s strong, but he’s not a typical super-handsome-super-tall-overpower-character… I mean, the dude is a grumpy little midget. Not exactly the traditionally cool type. Although, to me Levi is attractive BECAUSE of his unconventional rugged look, lol.

… but perhaps I’ll stop here before I end up writing a twenty page long paper on why Armin and Levi are such great characters. (*≧▽≦)ﾉｼ))

The second arrival is a pureneemo girl that I’ve been trying to hunt down for a while but she’s always eluded me. I’ve seen her up on Mandarake and Y!J several times, but always when my funds were already tied elsewhere and I couldn’t purchase her, and by the time I had money – she was already gone. (｡•́︿•̀｡) On Y!J especially I’ve come across several auctions for this doll starting at 10000 to 12000 yen, which were veeeery reasonable and bid on those… but of course, in the last minutes I would always get into a bidwar and the price would hike over my budget so I missed out. （；へ：）

Oh well, at least I finally have this lovely girl at home, and she’s soooo worth all the trouble! (/∇＼*)｡o○♡

Since this girl is Chiyo’s big sister, I wanted to give her a name that matches with Chiyo’s. I ended up with Chiemi, 千笑. The first kanji is the same as in Chiyo’s name, 千夜. Chiemi’s name could be loosely translated as “a thousand smiles”. Alisa sculpt has such a lovely smile, that I thought it would suit her well.（●´∀｀）ノ♡ She’s a very optimistic person, so it suits her character as well. She’s the artistic type and wants to study art in Europe someday. Chiemi is always drawing or painting, and Chiyo is also interested in art because of her sister.

Later on I also took a photo of Chiemi with Akemi, my other Alisa: 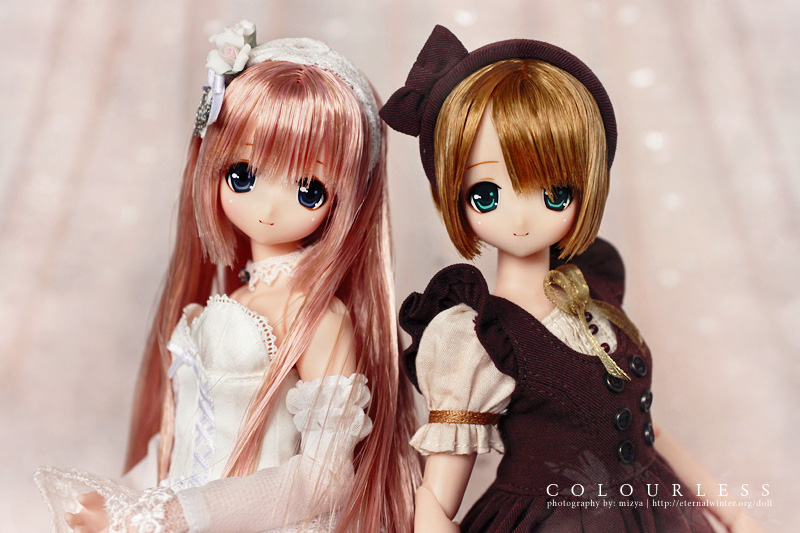 Only at this point I realised that their names are seemingly quite similar, Chiemi and Akemi, ahah… (ᗒᗜᗕ)՛̵̖ But their characters aren’t affiliated with each other so it’s okay. And if you look at the kanjis, they are actually 千笑 Chi-emi and 曉美 Ake-mi, so they’re not exactly the same.