I’m sorry that I haven’t replied to comments, I’ve had quite a busy week. I’m also leaving town on Thursday and I’m heading to Helsinki for the weekend (there’s a Dollfie Dream meet up on Saturday that I’m going to attend, yaay!) so I won’t be online much. Luckily next week should be a little easier, so I’ll have more time for doll stuff again. ヽ(*・ω・)ﾉ

But yeah, onto today’s topic. On May 7th in 2014, my first ever Azone doll arrived and she was a Mia. Now a little over year later, my newest neemo arrived and she just happens to be a Mia, too, haha~（ ´∀｀）I’ve been trying to hunt down the Osaka 6th anniversary Fluffy Bunny coordinate Mia for a few months now (I wrote an entry about her before: here). Because I wanted to find one for a reasonable price instead of paying expensive eBay prices. In March I was bidding on one that had a price at about 15000 yen, but unfortunately I missed out on the auction’s ending as I was visiting my parents and it ended just as I was travelling back home. I was pretty bummed because that price was the best that I’d seen so far and wasn’t sure if I’d find another deal as good as that. (´；ω；`) But lo and behold, a week later the same seller lists another Mia – of course I bid right away. And eventually I managed to win her under 14k, so it turned out to be a good thing that I missed out on the previous auction. Yaaay~ ヾ(@°▽°@)ノ

The reason why Mana only arrived now is because I also bought another item from Y!J and wanted them to be shipped together. I also had some other auctions that I planned to combine if I won them… but eventually I just decided to have these shipped because I didn’t want to wait for Mana any longer. ヾ(´▽｀;)ゝ

My pre-orders from QMagic and Sunnybobo on Etsy were also available to be picked up from the PO, so I opened those at the same time. I had some trouble with Sunnybobo, as I wrote here.

I love her, she’s so sweet and so are her clothes~ I also really love her hair & eye colour. (´ ▽｀).。ｏ♡ Azone’s bunny girls are my weakness, haha! I gave the bunny hat and white dress to Kotori: 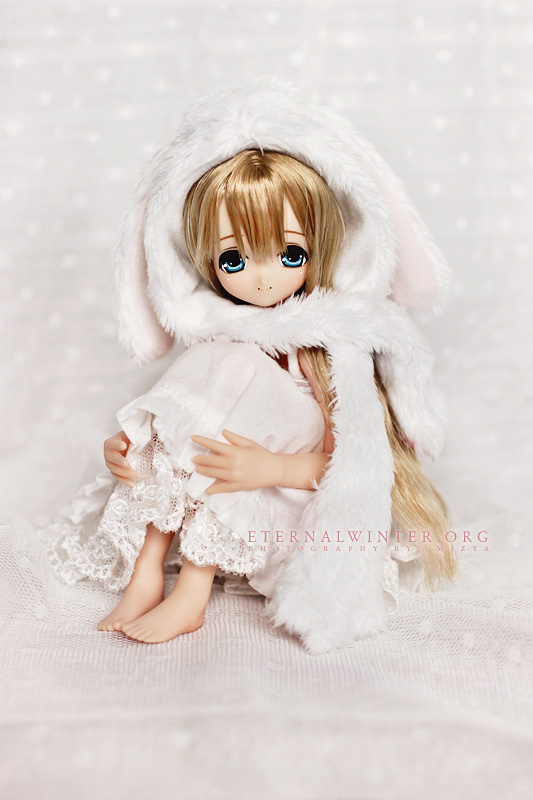 The Café is open

Evening at the park