Well, this is mainly a blog for my dolls, but now that my figure collection is expanding slowly but surely, I figured I’d babble about them for a bit.

I’ve been fascinated by figures for at least as long as I’ve been actively watching anime and reading manga (started in 2001 officially, although later on I’ve learned that many of my favourite childhood cartoons were basically animes — and Tonari no Totoro was my favourite movie when I was like 6 or 7 years old as they showed that and Kurenai no Buta on Finnish tv in 1996) buuuuut I didn’t start collecting them. Mainly ’cause I spent most of my money on buying manga and copic markers + other drawing equipment, lol. And when I got into BJDs, I definitely couldn’t afford to collect figures because the damn dolls are way too expensive… 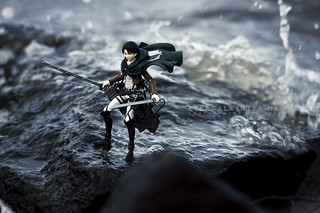 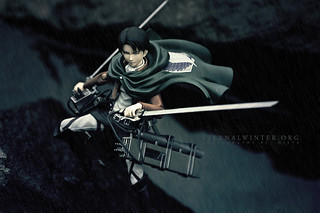 I’ll add these here. Because while I posted them already in that one Azone photo post, they’re more appropriate to be in the figure category.

Well, this year finally marked my doom when my brother said that he’d order the Levi figma as my birthday present in January. It felt weird to wait, like, six months for him ’cause BJDs usually ship in 3~4 months, lol. But when I finally got him home… well, like with everything else, there’s no way I’d stop with just one. -.-;; Sooo, since Levi, I’ve been keeping an eye on possible other figmas that I might like (and I keep hoping that they’ll make at least Jean and Annie figmas ;__; *sobs*). With BJDs I’m so used to having poseable photography targets that I definitely like figmas ’cause they’re also poseable. But there are some really gorgeous scaled figures that I also would love to own someday. Only ones that closely resemble the characters and have an interesting or a versatile pose… because before a collector, I am a photographer, so I prefer owning things that are interesting to photograph, rather than just pretty. xD Well, it’s a good thing that I’m picky about them, otherwise I’d have a mile long wishlist… “””oTL

But anyway – soon after I’d decided I want another figma, I spotted a re-release of the Skyward Sword Link. I’ve always enjoyed seeing other people’s photos of said figma AND I adore The Legend of Zelda games, they’ve been my favourites since a long time ago. I remember back when me and my brother were kids, we used to go to our great uncle’s place and I would watch my bro play TLoZ on the NES. xD And later on we got SNES and after that N64 — when Ocarina of Time was released, it was our favourite game for a looooong time. My brother played it through several times and I loved watching him play, lol. Also, thanks to OOT I fell in love with grown up!Link, lmao. x’D You could say he’s my first proper fictional character crush, haha. … now I got quite sidetracked, but yeah – I definitely needed that Link figma, so I ordered one. He wasn’t that expensive either, but well, pretty much anything is cheap compared to BJDs… :’D

Link’s been shipped already and I’m waiting for him to arrive… he could arrive any day now. He’s one of the last things that I ordered from Hobby Search, before I switched over to Amiami. I ordered my first Azone from HS so at first I felt more comfortable ordering from them ’cause the Amiami website seemed confusing to me… bbuuuttt once I got the hang of Amiami, I started liking them more since they offer Registered airmail in addition to EMS and SAL. I’d rather not use EMS unless it’s something really expensive, but SAL is a bit unreliable since there’s no tracking number… and sometimes they’re really slow. :S Airmail is relatively fast and has tracking, so I prefer using that.

Well, none of my SAL packages have been lost so far… *knocks on wood* but the risk is always there. And it makes me especially nervous since HS denies all responsibility if the packages get lost. With BJD companies they usually offer a replacement if your doll/items get lost in the mail… although, even if they ship by EMS the packages are NOT insured by default in Korea. So it’s never safe to assume you will get a replacement even with BJD companies, it’s better to make sure beforehand. I learned this through the hard way when my doll from Dollshe got lost in the mail for two weeks in 2012 – when I contacted the company, they said that they would not replace my doll if he was lost in the mail as I hadn’t paid for insurance. Well, luckily he wasn’t lost, just delayed. But in the worst case scenario, I would’ve lost the doll AND my money. :/ After that I’ve been more careful and asked companies about their policy if I haven’t found the info elsewhere. Withdoll and Iplehouse, for example, will replace lost dolls for sure.

… this is always happens every time that I start writing text posts, I get all sidetracked, lol!

But yeah, back to figures. In addition to the Link figma I’m also waiting on a nendoroid. I haven’t been too keen on them because I’m not a big fan of the chibi aesthetic and they’re not as poseable as figmas, but… my brother asked if there’s a nendoroid I’d like as a Christmas/birthday present, so… who am I to say no when he wants to buy me something, lol! So I was like YES! I WANT HINATA FROM HAIKYUU!! Because his nendoroid is super cute! xD And I really love Haikyuu!!, my dorky volley bbies~ ♥ I really enjoyed the anime and I hope that there will be a second season. x3 But yeah, the nendoroid will be released in January, so I have to wait for him a bit. But I guess this time he’ll arrive closer to my birthday compared to Levi, lol. :’D My birthday is in January, you see. I’m looking forward to getting Hinata, as he’s going to be my first nendoroid. :3 I hope that they’ll at least make Kageyama at some point because I want him as a buddy for Hinata, haha~

But yeah, that concludes my figure news for now… this post is already quite long, ahah. xD;; To conclude, I’ll add this photo of Link and Hinata that I uploaded into flickr: