I returned late last night from my Easter holiday + trip to Helsinki… well, at least I was home before midnight, but I was so damn tired. (;´∀｀) And I’m still tired today, but I couldn’t help cycling to the PO to pick up some packages that had arrived while I was away~ ー( ´ ▽ ` )ﾉ This is a very quick box opening, I didn’t have a lot of time for taking photos.

I didn’t really plan to get this Raili, although I’ve loved her stock outfit for a long time – and now I love it even more that I’ve seen it in person! ♥ It’s such a lovely shade of bluish turquoise~ (*⌒∇⌒*) … but yeah, I wasn’t too keen on her yellowy blonde hair, I actually preferred the regular version’s whiter hair… but the regular version’s all white outfit wasn’t as interesting to me. Aaanyway, I spotted this Raili on Mandarake for only 12000 yen, so I couldn’t resist. I was sure someone else would’ve nabbed her before I could, and I’d just get a “sorry, this item was sold out” message… but to my surprise, I managed to get her! ♥

But yeah, I’ve been waiting for the Swan Lake Raili release, and I still am, so I didn’t think I’d buy any other Raili this year… well, things don’t always work out the way I plan, ahah. When I was waiting for this Majokko Raili in the mail, I was thinking that I’ll probably only keep the outfit and sell the doll and then have Swan Lake Raili wear this outfit… buuuuuut now seeing this cutiepie in person, I can’t bear to part with her! (*⌒∇⌒*) Her hair doesn’t look as bad as I originally thought, and I think I actually prefer it more than Swan Lake Raili’s silver hair… so I guess it’s gonna turn out so that I’m keeping this Raili and getting the Swan Lake outfit for her, ahah. Hopefully the other Raili won’t decide to stay as well… (;´∀｀)

Naturally I’m still on the hunt for a Bambi-san Raili as well, but I don’t know if I’ll ever find the fullset for a price that I’m willing to pay. ヽ(￣д￣;)ノ Hopefully one day I can get her, though… I love her cute brown eyes~ (´；д；`) ♥

But yes, this girl got the name Suzume, and she’ll be my half-Japanese, half-Finnish sweetiepie. Because Raili is an exchange student from the north… some sources say that she’s from Scandinavia, BUT I firmly believe that she’s Finnish, haha. Especially since in the Bambi-san Raili’s leaflet, there is that little 4-koma comic strip where she arrives and says “Moi!” which is “Hi!” in Finnish. It seems like Japanese people really like “Moi”, in last year’s Frostbite when I went to see Yamaguchi Kappei, he said “Moi!” every time that he greeted someone (which was totally adorable and I nearly died when it was my turn to get an autograph and he said “Moi!” to me uguuu).（ ´∀｀） … okay now I’m getting sidetracked again. But yes, as a Finnish person I want to believe that Raili is Finnish. ( ＾∇＾) Well, it could be that some people mistakenly think that Finland is a part of Scandinavia, but it isn’t. Only Norway, Sweden, Denmark and Iceland belong to Scandinavia. If you want to refer to Norway, Sweden, Denmark, Iceland and Finland as a group, then you should use the term “Nordic countries”. [/end of geography lesson] … sorry, I’m really particular about the correct terms and stuff, it’s an occupational disease. (･∀･；)

… damn this post keeps getting sidetracked, I’m sorry. It’s late and I’m tired. (;´∀｀) AHEM, BACK TO SUZUME. The word suzume can mean “sparrow”, which is cute, but I wanted to use a different writing that would tell more about her personality and appearance. She has those pretty pale blue eyes and I imagine her to be a soft-spoken and gentle girl… and her stock outfit has a winter theme, so I settled for this writing: 涼瞳. The first kanji means “refreshing, cool” and the latter is the kanji for “pupil” or “eye”. So the meanings refer to the winter theme and her eyes. And I can use the nickname “Suzu” for her, which can mean “bell”… because in my mind she has this quiet but clear voice, kind of like a little bell~（*´▽｀*） So I think that the name is pretty perfect for her. ♥

When I named my Japanese BJD characters, I didn’t think too much about the meanings of their names (except with Hisoka) ’cause I didn’t have as much knowledge of the Japanese language… but now I’m trying to do better with my neemos and DDs, lol. It helps in studying kanjis, too~

*looks at the lenght of the text* ━Σ(ﾟДﾟ|||)━ … Ookay, I think I’ve blabbed enough for now, time to wrap up this post. 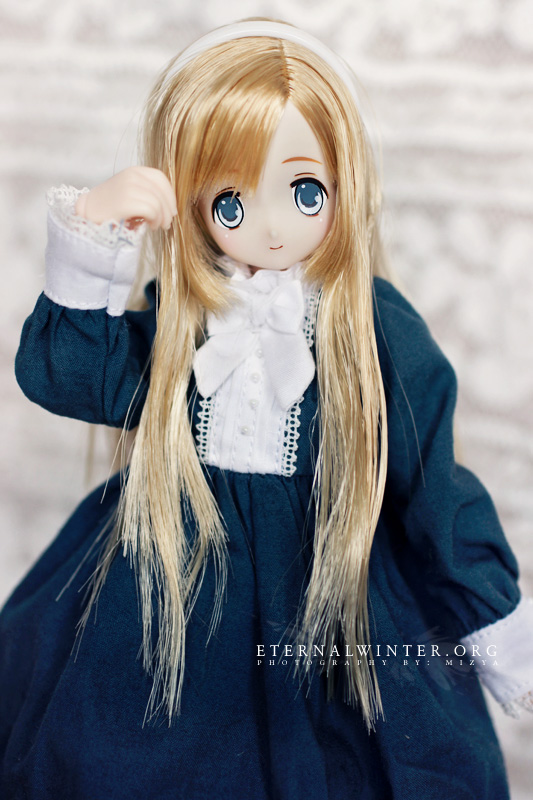