I died a few days ago when I was browsing flickr, as I noticed that Άρτεμις had posted more doll show photos and lo and behold: a new release of Yuzuha!!! (*＾ワ＾*) BlackxPink in the Pink! Pink! a la Mode series, eeep~ ♥ 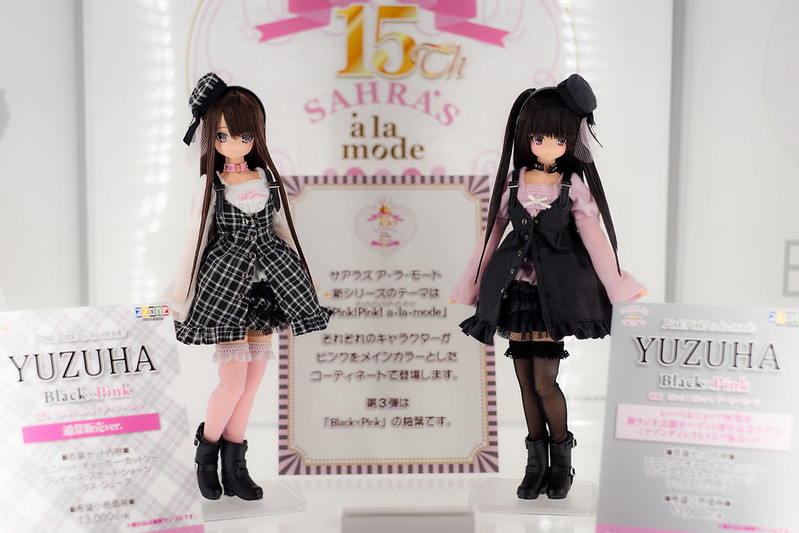 Photo ©Άρτεμις
I love them both! But I already have a Yuzuha with natural black hair, so I think that this time I’m more drawn towards the lighter haired one. ヽ(*⌒∇⌒*)ﾉ ♥ Which is a good thing, because she’s the regular version and the darker brown haired girl with the little pigtails is the DS version, so getting her would be a bit more complicated.

I also noticed that they finally have months for the releases of the Otogi no Kuni Series Briar Rose Lien and Swan Lake Raili. Seems like I will be broke all summer because:

Bye, bye money! ヘ（´ｏ｀）ヘ Also, now the owner photos of the new detective Aoto and Yuuta are starting to pop up and Aoto is soooo cuuute. But I must stay strong!!

And as if this all wasn’t enough to kill my wallet, this morning I checked Azone’s blog and:

Needless to say, I MUST have that black haired Minami-sensei with the bunny coordinate! (ノ＞▽＜。)ノ At the end of last year I found that particular Minami-sensei on Y!J for 14000 yen but I didn’t buy her as I was saving up for Usagi-san Miu back then. And now all the Minami-senseis have been around 18-20k, and I’m reluctant to pay that much for her, so I have been waiting for a good deal… but now they’re releasing a new version of her, with a cute bunny outfit to boot!!! ♥ I swear Azone knows that their bunny girls are my weakness, ahah! (ᗒᗜᗕ)՛̵̖ That outfit would be soo perfect for Kotone. Some weeks ago I managed to finally find the Osaka 6th anniversary Mia with the white bunny coordinate (she arrived in Finland last night and I just paid her ransom, so hopefully I’ll get her next week) for a reasonable price and now I have a new bunny to hunt down, lol!

The red haired Minami-sensei is a DS version and the brown haired one is the label shop version. (;´∀｀) So of course the one I want is harder to get, since you can only buy them at the physical shop, while the other one would be possible to order from their online shop via a proxy. Well, there are people who can buy stuff for you from the physical shops too, but my brother tells me that’s quite expensive. So stalking Y!J it is! It took me a few months to track down the Osaka Bunny coordinate Mia, but I eventually got her, so I’m sure that I’ll be able to find this Minami as well, yaaay~ ヾ(＠^∇^＠)ノ

I’m really excited, this bunny outfit works better for me than the teacher gear the original release of this Minami-sensei has. Since my Minami would be Kasumi’s friend from high school, who is now also in the university and she’s studying to become a vet. So, now with this doll I can get Minami the doll AND a cute outfit for Kotone! ’cause Kotori is getting the Osaka Mia’s coordinate, since she’s a white bunny. (ღ˘⌣˘ღ) ♥

But damn it, really, Azone… I thought I already had plenty to look forward to with Briar Rose Lien and Swan lake Raili this year, and now you throw a Yuzuha and Minami at me too! Evill~ … But please have my wallet. ヘ(￣ー￣ヘ)